September 11, 2011 marks the 10th anniversary of the devastating attacks that forever changed the course of American history.  Our members reflect on the impact  that day had on them both  personally and professionally. Like thousands of other Americans, Ricky McCoy answered the call to serve in the weeks following 9/11. Ricky joined the fledgling Transportation Security Administration, which was created in the aftermath of the 9/11 attacks to transfer control of airport security from the private sector to the federal government. Currently, Ricky is a Lead TSO at O’Hare International Airport in Chicago and serves as president of AFGE Local 777. 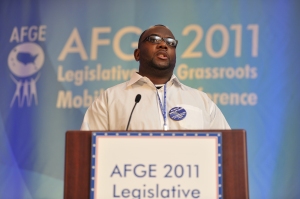 It was beautiful day. I had just return from New Jersey, where I had job interview with the State Police. I came in from walking my dogs, turned on the television and there it was — a plane flying into the World Trade Center. I got so sick. The sickness was then followed by rage and anger. I could not believe this was happening — not in my country. This day changed my life forever. I never take anything for granted. Instead of taking a job with the New Jersey State Police, I applied at the Transportation Security Administration and was hired as a TSO on Sept. 1, 2002.

I joined TSA to make a difference, to be on the front line in this war against terror. I felt this was a task I had to take. I have never looked back. Even though this agency has its flaws, we the TSA workforce will always protect our skies, ports, and roads. We may be criticized by some in Congress and their cronies, but we will never forget why TSA was formed.

a blog for AFGE's members and employees to communicate their opinions in a forum with each other
View all posts by Union Blog →
This entry was posted in 9/11, TSA and tagged AFGE Local 777, Chicaco O'Hare International Airport. Bookmark the permalink.